The Wraith is a hovering mortar tank, the equivalent to the UNSC Scorpion, utilized by the Covenant Empire. It features a rotating Plasma turret and a short speed boost. Its "wings" extending from each side can be used to ram enemy troops at high speeds. There is a new improved version of the wraith released in 2012 it comes with a golden combat elite, golden spec ops elite and a green EOD spartan it also features a forerunner structure and numerous new weapons.

Establish your army, build and expand your units with the Halo Covenant Wraith playset by Mega Bloks! Build and recreate epic battle scenes between the UNSC and the Covenant with this authentic buildable vehicle! The Wraith is the Covenant’s main heavy assault tank for ground engagements. It has a retractable plasma mortar cannon whose destructive power can wipe out practically any armored or infantry target imaginable. A UNSC Orange Hayabusa Spartan-II attempts to eliminate the Wraith with its arctic gauss turret but the Wraith’s uniquely shaped châssis is able to deflect even the heaviest frontal attacks. Even to the mighty UNSC Spartans, the Wraith is a truly dangerous foe to overcome. 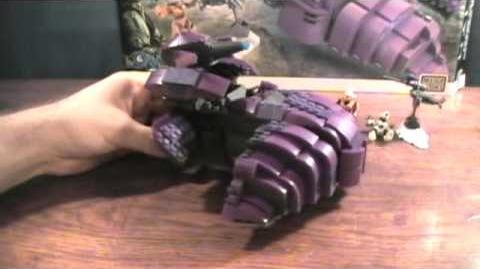