The Earth-Covenant war has accounted for 30+ years of casualties on both sides – build and replenish your armies with the Halo Wars Combat Unit 3 from Mega Bloks! The expansion pack includes 5 fully articulated mini-figures of the game’s key soldiers from The UNSC and The Covenant with matching weapons. Prepare UNSC troops to meet The Covenant in a head-to-head battle to decide the outcome of the War – re-create epic battles from the video game franchise or build you own! Will the UNSC prevail over their overwhelming enemy or will the Covenant succeed in exterminating the Human race?

Choose your side and rout the enemy with sheer numbers! 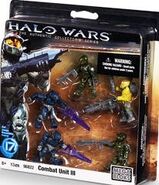