The Marine Corps is the primary interplanetary military force of the UNSC. They differ from the UNSC Army in the fact that the Marines travel between systems, while the Army relies on troops already stationed upon a colony. Marines, though highly formidable against other humans, are largely no match for the superior military and technological might of the Covenant's armed forces. They came in some of the 2010 sets and were modeled after the Halo Wars Marines, with their faces obscured by balaclavas. It appears that in 2011 at least some of them have retooled heads that lack a balaclava, revealing their faces and making them resemble the Marines seen in Halo: Combat Evolved and a Halo 3 style one in the anniversary edition: Floodgate set. Open mask marines' legs are a mix of two different legs. The upper part is actually the higher piece of a Spartan's leg, in different colors. The lower part is made with the lower piece of the Pelican Pilot's leg, in different colors like before. Unlike the Halo Wars/Halo 3 marines mega bloks version of the Halo 4 marine is so far only available in game accurate colours. 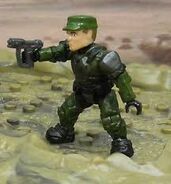