View source
watch 01:54
Obi-Wan Finale - The Loop
Do you like this video?
Play Sound

The Shotgun is a devastating close quarters weapon. Like all shotguns, it is designed to fire multiple spherical projectiles called pellets. This that it is able to obliterate foes at close range, but this also makes it virtually useless at longer ranges. It is a pump action weapon (meaning that it must be pumped after each shot in order to load another shell into the chamber), and is fed by dual tubular non-detachable magazines, similar to the real-world KSG-12. The Shotgun was one of the the first weapons released in the Halo Wars line, along with the SMG. It appears to be the M90A Shotgun from Halo 3. And there is a new moulded shotgun , which is smaller.

There is a new version, which is based off of the Halo Reach Shotgun. 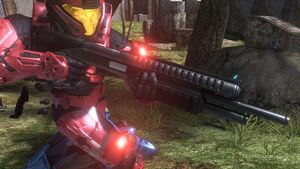