The Shade is a type of Covenant turret. It is not mobile like the Plasma Cannon but despite this, the gunner gets more protection. It is mostly used by Grunts, but Elites and Brutes also use them too. There are several different Shade models, which are all unique variations of each other, few games keeping a similar model. A set containing the Halo 3/Reach design has been released in the USA and Europe.

In the Mega Bloks universe there are many versions including some non-canon Shade turrets. Also as of 2013 there are only two turrets that actually resemble in game turrets: One Halo 3 version released in 2011, and one based on Halo: CE version, that comes in the 2013 UNSC Cobra set. 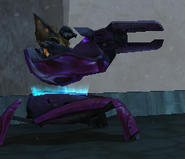 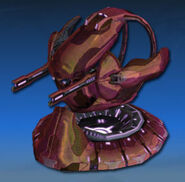 Shade
Add a photo to this gallery

Retrieved from "https://megablokshalowars.fandom.com/wiki/Shade?oldid=21693"
Community content is available under CC-BY-SA unless otherwise noted.