The MJOLNIR Powered Assault Armor/Mark IV[G], or Grenadier armor, is one of the earliest known variations of the MJOLNIR armor system. Intended for use by SPARTAN Commandoes specializing in the use of non-nuclear explosive ordnance (i.e. grenades, landmines, claymores, and various anti-material charges), the Grenadier armor is very simply an up-armored version of the standard issue Mk. IV armor. It also served as a test bed for later improvements to the MJOLNIR system, such as energy shielding. 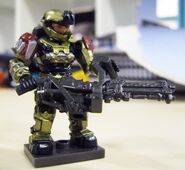 "Metallic Tan" Grenadier from the 'Spade VS Skirmisher' set (96981) 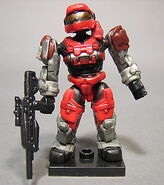 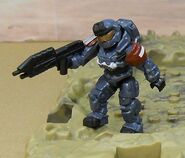