This set features a Type-38 Tyrant AA gun and a new Halo: Reach style M12R Rockethog (refered to as a Missilehog on this wiki to avoid confusion with the 2010 M12A1 Rockethog), and includes a HAZOP Spartan with an MA37 Assault Rifle, a UNSC Marine with a Battle Rifle, an Elite Ascetic with a Energy Sword and Plasma Pistol, and a new Jump Pack Brute with a Mauler and Purple Plasma Grenade. Several weapons caches are also included, to store 4 additional grenades and 3 additional Plasma Pistols. 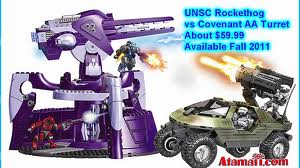