The Spiker is a Brute weapon. Though classified as a Type-25 Carbine, the Brutes wield the Spiker like a pistol or SMG. It fires metal spikes that are contained within a cylindrical magazine, then elongated and superheated between two powerful electromagnets. The Spiker also has two tungsten carbide bayonets attached to the bottom similar to the Brute Shot. Only Spartans, Elites, and Brutes can dual-wield the spiker because of its weight. However, Brutes very rarely dual-wield Spikers, and Elites refrain from using Brute or Human weapons unless absolutely necessary. It Is featured in sets Including Covenant Combat Unit Brute Prowler Battlescape Covenant Red Combat Unit Rockethog vs AA Gun Hero Pack Series 2 Hero Pack Series 3 Covenant Strike 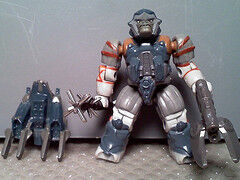