The rugged yet elegant D77-TC Pelican is the UNSC's dedicated space-to-surface transport.Used mainly by the Marine Corps, the Pelican can transport Warthogs, Supply cases and a Scorpion MBT ( Main Battle Tank).

The newer model
Add a photo to this gallery

Establish your army, build and expand your units with the Halo UNSC Pelican Dropship playset by Mega Bloks! Build and recreate epic battle scenes between the UNSC and the Covenant with this authentic buildable vehicle! A mainstay of the UNSC military, the Pelican Dropship's primary role is to deliver troops, equipment and weaponry to and from forward combat positions, making them an essential tool in the war against the Covenant. The key to its longevity and versatility comes from its four rotating thrusters for VTOL (Vertical Takeoff and Landing) capability, allowing it to deploy or evacuate UNSC forces within moments of landing. Set your pilot in the fully functional cockpit, load your Pelican's troop bay with UNSC soldiers through the opening rear bay door and take your special forces into action!

At the 2013 toy fair it was revealed there would be a pelican remake that was not a D77-TC but rather the newer D79-TC that includes the new features of the in-game one along with the new lights and sounds! 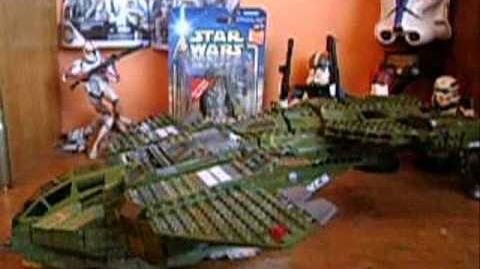 Retrieved from "https://megablokshalowars.fandom.com/wiki/Pelican?oldid=21800"
Community content is available under CC-BY-SA unless otherwise noted.