The Locust is a walker used by the Covenant and was originally used as a mining vehicle along with the Scarab, the vehicle uses an extremely powerful energy beam effective against most structures and a heavy energy shield however if the shield is lowered the vehicle becomes fairly vulnerable to most attacks.

The minifigures in the Locust set

The box it comes in 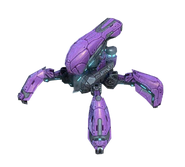 Locust In game
Add a photo to this gallery

Retrieved from "https://megablokshalowars.fandom.com/wiki/Locust?oldid=21649"
Community content is available under CC-BY-SA unless otherwise noted.