Mgalekgolo, or Hunters, are the large gestalt forms of lekgolo worm colonies, and serve as heavy support troops for the Covenant. They are highly formidable opponents, even for SPARTANs. Hunters fight in pairs called "bond brothers", and they will become enraged if their bond brother gets killed. Hunters have been included in 3 sets so far. Even though Hunters always travel in pairs, In the Wolverine sets, there is only 1 Hunter. However, 2 blue Halo 3 Hunters were included in the EVA's Last Stand set.

Hunters are extremely unusual creatures. Native to the planet Te, the Lekgolo feed on metal. The individual worms are very unintelligent as well as non-sentient, however, Lekgolo colonies amass themselves into massive bipedal forms called Mgalekgolo, and combine their intelligence into a single consciousness via biochemical bonds between the worms, resulting in a single highly intelligent, sentient awareness. For this reason, Mgalekgolo are considered a single individual, despite being composed of numerous living beings.

Hunters are often seen in pairs of "bond brothers". When one Hunter grows too large, its body splits into two smaller Hunters. Hunters that have split in this manner acquire tentacle-like appendages which sprout from heir back. The two Hunters are called bond brothers, and share a special relationship with eachother. If a Hunter's bond brother is killed in battle, it goes into a state of berserk rage, and will stop at nothing to destroy its bond brother's killer.

Mgalekgolo are extremely flexible and strong, due to their bodies containing mostly muscle and no skeletal structure. Their strength allows them to wear their special armor, the shield of which alone weighs at least over ten tons. The Hunters are also the only species capable of wielding the Assault Cannon, a powerful weapon that fires a radioactive incendiary gel and is integrated into the right arm of their armor.

Hunters speak by vibrating the worms in their body, and usually at such low frequencies and high intensities that their speech is more so "felt" than "heard". Little else is known about the way they communicate, as they rarely speak to anyone besides other Hunters, with the exception of high-ranking Elites. This is because the Lekgolo see themselves as a superior species, and that no one other than the Elites are worth their respect, or worth talking to. Additionally, since Hunters see themselves as superior, they will not hesitate to kill any lesser Covenant soldiers unfortunate enough to get between them and their foe.

Hunter culture is mysterious and poorly understood. The Hunters follow their own religion, not that of the Covenant, only being part of the alien conglomerate to avoid the destruction of their race. They are ritualistic, as well as vicious and ruthless. They have been observed shredding enemies to bits or beating them into pulp in rage-filled, bloodthirsty fervor, only to abruptly stop for a moment to recite war poetry. 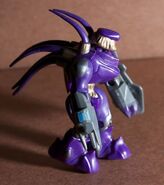 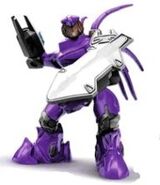