Establish your army, build and expand your bases with the Halo UNSC Hornet Attack playset by Mega Bloks! Recreate epic battle scenes between the UNSC and the Covenant with these authentic buildable playsets! The Covenant Deployable Lookout Tower is an anti-gravity lookout sniper tower used to fortify Covenant-occupied areas and snipe UNSC troopers, or harass vehicles. When deployed, the tower hovers in the air and is used as a sniper lookout tower against incoming UNSC units. Made of new red camo blocks, the Covenant forces will have their hands full trying to defend against this redesigned VTOL UNSC Hornet. 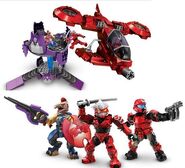 Retrieved from "https://megablokshalowars.fandom.com/wiki/Hornet_Attack?oldid=16447"
Community content is available under CC-BY-SA unless otherwise noted.