The Unggoy, or Grunts as they are known by UNSC personnel, are weaker than other races, but come in large numbers. They are lead by Elites, Brutes or higher ranking grunts, as with most other species. They are short and weak and have been know to fall asleep easily, and they will normally run away if their leader is killed. Thus, their strength lies in numbers, as is seen in Halo: The Fall of Reach, in which an entire division of ODSTs are torn apart by an army of Grunts. They have appeared in several sets, however recently they haven't appeared in many sets. Oddly, in the earlier sets, they are unarmed, unlike in the newer sets in which they are armed with Plasma Pistols or Plasma Grenades. 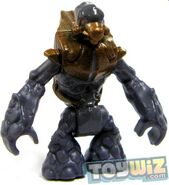 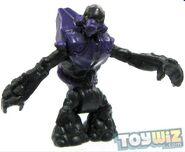