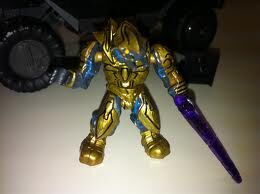 The Arbiter is a new mini-figure, that was released with the Phantom set; so far it is one of the only two set with an arbiter. The figure is the Arbiter of Halo Wars, Ripa 'Moramee. The figure comes with a new translucent purple Energy Sword that differs from others released that were blue/cyan in colour. It also has peg holes in the back, along with the Phantom pilot, similar to the ones on Brute, Spartan, and Marine mini-figures. A gold Arbiter, Thel 'Vadam, is also in the Halo CE rockethog which is limited to 5000 made and was PAX/Halo Fest exclusive. A second Thel Vadam Arbiter is set to appear in late 2014 as part of a halo 2 anniversary set which contains the covenant shadow, 2 jackals, 3 Honor Guards, The arbiter, Prophet of truth, 2 UNSC marines and sergeant Johnson. This Thel Vadam is based on the halo 2 version where the armor was closer to the silver colour of Ripa moramee's armor than the bronze which appeared in Halo 3.

"Do you enjoy the slaughter?" -Prophet of Regret

"I feel the joy of doing what I was born to. I have no regrets, save that I will not die fighting." -Ripa 'Moramee

Ripa 'Moramee, included with the Covenant Phantom set, was the 17th Arbiter in the Line of Immaculate Succession. Before becoming Arbiter, he led a brutal uprising against his own clan, which ultimately failed, leading to his imprisonment. His skill and tenacity was recognized by the High Prophet of Regret, who made him Arbiter and tasked him with the annihilation of the human race. Ripa was given complete control of the Covenant forces attacking humanity immediately following the First Battle of Harvest in late 2525.

'Moramee's behavior was unusually violent for an Elite. He was hotheaded and egotistical, which often crippled his otherwise brilliant tactical mind. He regarded humans as wholly unworthy of respect or honorable treatment, simply viewing them as vermin to be ruthlessly slaughtered with utmost prejudice.

"My face will be the last thing your pathetic eyes ever see."

Ripa's inflated ego and underestimation of humans was ultimately his downfall in 2531, as he was tricked into letting his guard down by Sergeant John Forge, who then stabbed him in the neck and chest.

"There was honor in our Covenant once... and there shall be again!" -Thel 'Vadam

The most famous Arbiter was Thel 'Vadam, included with the CE Warthog from Halo Fest. Formerly known as Imperial Admiral Thel 'Vadamee, Fleet Master of The Fleet of Particular Justice, the massive Covenant fleet that glassed Reach in the summer of 2552, Thel had failed to prevent the destruction of Installation 04, AKA Alpha Halo, at the hands of the Master Chief. Branded a Heretic for his failure, he was sentenced to death. However, instead of a normal execution, the High Prophet of Truth decided Thel would die as Arbiter, and was tasked with the elimination of a Heretic uprising in the Forerunner Gas Mines on Threshold, the gas giant that installation 04 had once orbited. 'Vadamee, accompanied by a special forces unit led by Rtas 'Vadumee, succesfully dismantled the uprising and killed the Heretics' leader, Sesa 'Refumee, but Thel did not die as planned.

The Prophets issued 'Vadamee a new task, the retrieval of the Index of Installation 05 (which is required to activate the Halos), which was being pursued by the humans, whom had followed the Prophet of Regret to Installation 05. This time, 'Vadamee was assisted by Brutes led by Tartarus, who had taken the place of the Elites as the military leaders of the Covenant after the Elites had failed to save the Prophet of Regret from being killed by the Master Chief. Thel once again accomplished his mission without dying, so Tartarus betrayed him, as he had been ordered to do by the Prophets if Thel survived.

However, the Gravemind on Installation 05 saved and captured both the Master Chief and the Arbiter, tasking them with preventing the activation of the Halos. While the Master Chief attacked the Prophets aboard High Charity, Thel was sent back to the Halo's surface, where he met up with other Elites and began slaughtering the Brutes and their followers.

Soon, Tartarus arrived with the Index intent on activating Halo, and Thel made a truce with the human Sergeant Major Avery J. Johnson. Together, the Arbiter and Sgt. Johnson managed to kill Tartarus and stop the activation of the Halos, which led to the creation of an uneasy alliance between the Covenant Separatists and the humans.

Now known as Thel 'Vadam, the Arbiter would meet up and do battle with the Master Chief on Earth, before accompanying him to the Ark, where 'Vadam would ultimately kill the High Prophet of Truth, finally ending the Human-Covenant War after more than a quarter-century of death and bitter conflict.

There have been far more Arbiters than just the two above, however, these Arbiters have not been featured in Mega Bloks sets, and likely never will due to the fact they are rarely mentioned or even shown in the Halo expanded universe.

One such Arbiter is Fal 'Chavamee, an Arbiter during the early years of the Covenant Empire. At this time, the position of Arbiter was given to honorable Elites, rather than those who were dishonored but battle-hardened criminals. This changed when 'Chavamee expressed dislike for the newly formed Covenant. He ws branded a heretic, and Haka 'Chavamee set out to kill him. Haka forced Roh 'Chavam, Fal's closest friend, to brutally murder Fal's wife, Han, before killing Roh as well. Fal returned home to find the broken bodies of his wife and friend lying on the floor. Furious and wracked with grief, Fal swore to kill Haka and avenge the deaths of Roh and Han. Fal went to Haka to find a massive army defending him, something which Fal had anticipated. Fal defeated this army and confronted Haka. They engaged in a duel, which resulted in both of their deaths. After this, the position of Arbiter was given to dishonored but skilled Elites during times of crisis, and by dying in battle to protect the Covenant the Arbiter would regain their honor.

There were also Arbiters besides Ripa 'Moramee and Thel 'Vadam who fought in the Human-Covenant War. In 2535, an unnamed Arbiter fought and possibly died in the Jericho VII theatre of operations. Another Arbiter (possibly the same one from Jericho VII) fought and died in the Battle of Reach in 2552, coincidentally under the command of his successor, Imperial Admiral Thel 'Vadamee.

Other Arbiters played key roles in ending the Taming of the Lekgolo and the Unggoy Disobediences.