The Sangheili, or Elites, are a saurian species of fierce, proud, strong, agile, and intelligent warriors and combat tacticians. Sangheili are named after their home planet, Sanghelios. They are known to Humans as Elites due to their skill in combat, as well as their high rank within the Covenant. They were the military backbone of the Covenant up until the Great Schism in 2552, when they were betrayed, they defected and allied with the Humans, with the Brutes taking their place. They lead Grunts, Jackals, and many others into battle. They are the most common Covenant species in the sets. Higher ranking Elites wield the Energy Sword, which is exclusive to their species.

After the end of the Human-Covenant War, a Sangheili Civil War was fought between the Arbiter and his followers (who wished to stay at peace with humanity) and those who still wanted to destroy the humans. The latter was defeated and forced off of Sanghelios. Jul 'Mdama rallied these exiled Elites and brought them to Requiem in search of the Ur-Didact, in hopes that they could awaken the Forerunner and gain his support in destroying humanity. 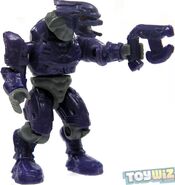