The Single Occupant Exoatmosphere Insertion Vehicle (SOEIV), also known as the Human Entry Vehicle, is a uniquely designed combat insertion pod created to allow for the deployment of soldiers into contested fields of battle from low space orbit. After the pod clears orbit and reaches the atmosphere, the upper exterior panels separate from the pod to create a drag-type parachute to aid in slowing the Pod on entry. The included ODST Close Quarters Specialist favors close range, "in your face" combat, preferring to take the fight directly to their enemies. With enhanced left pauldron, he is better protected from ballistic attacks than a normal soldier. Head into battle feet first, arm your trooper with his MA5 assault rifle and send the Covenant heading for the hills! 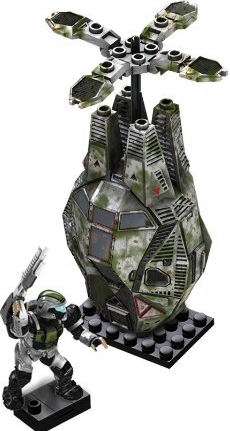