This is an newly released set. It Includes 2 landscape pieces one large with a bunker, one smaller that can act as a roof or to cover the steel part of the battlescape also includes a steel colored Mongoose that can drive into the bunker. Included with the set are an Orange CQB Spartan with Magnum and Battle Rifle, 2 red Grunts with 2 blue Plasma Grenades each, and a Active Camo Brute with an Active Camo Spiker. All of these figures and the steel Mongoose can only be obtained in this set.

At the throttle of his UNSC Mongoose, the CQB Spartan rides over blasted dirt and rubble. But, unknown to him, two Grunts and an "Active Camo" Brute have prepared an ambush for the Spartan.

Made with interconnecting tiles to let you expand your scenario, you can join multiple Halo Battlescapes together to create even larger and more dynamic environments! Each Halo Battlescape includes durable pronged plates and two vehicle display rods to pose your forces however you want! Go inside the Outpost and open the roof to command firefights between enemy forces or go outside and declare all out war with UNSC and Covenant units!

Choose your side, build the battle and display the victor! 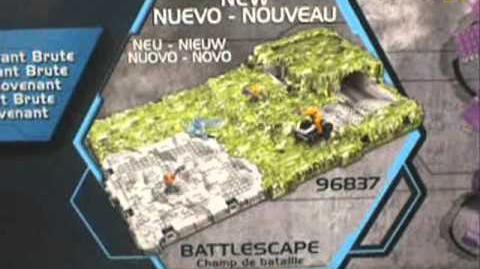 Retrieved from "https://megablokshalowars.fandom.com/wiki/Battlescape?oldid=21811"
Community content is available under CC-BY-SA unless otherwise noted.