Active Camouflage, more commonly known as Active Camo or AvCam, is a Covenant cloaking technology which bends light around the user, making them entirely transparent. The technology isn't perfect, however, as the light distortion is still visible, especially when the user is moving, and the technology does not work effectively with energy shields. It is commonly used by Stealth Sangheili and Special operation Sangheili, but can be used by Spartans and was used by Jiralhanae Stalkers during Great schism 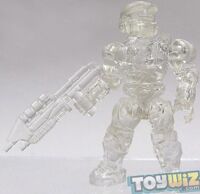